Events – Past and Planned 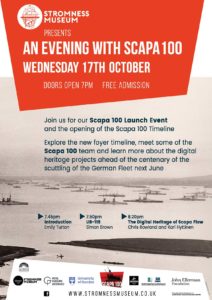 Unfortunately I could not make this event in Stromness. The evening featured the unveiling of the Scapa Flow timeline (described as a ‘collaborative project between Scapa 100, Stromness Museum, the National Maritime Museum, the University of Dundee and  Huskyan Charters’) and a presentation on UB.116 by Simon Brown. 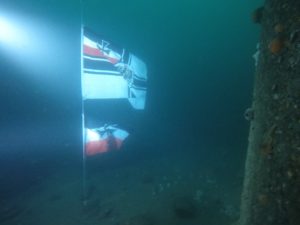 On 22 November, flags were placed ‘on each of the seven remaining wrecks as a mark of respect and commemoration’ by divers in Scapa Flow. The flags have been left so that others diving the wrecks might be encouraged to have ‘a moment of reflection and remembrance’.

Historic Scotland was consulted prior to the project and raised no objections. The flags are tied on with 3mm cord to prevent damage to the wrecks should a set be snagged. Periodic maintenance dives throughout 2019 will be held to inspect and replace the rigging if required. 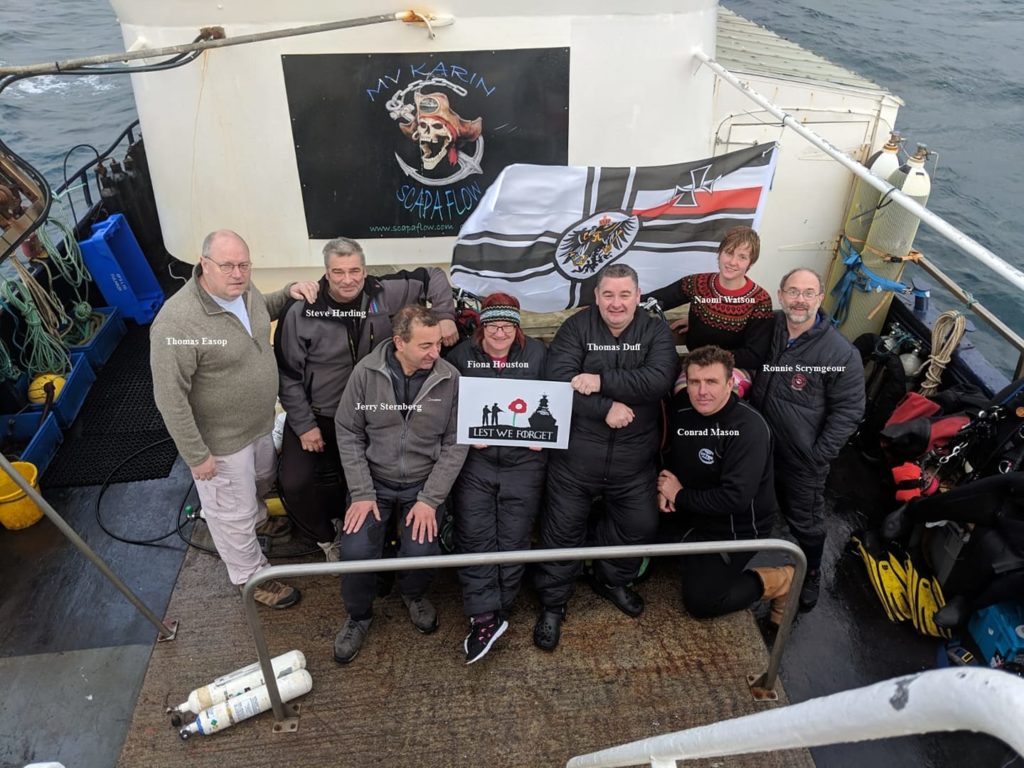 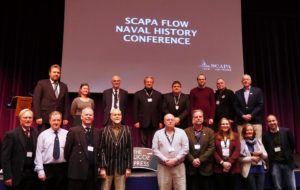 A two-day event was held at Kirkwall Grammar School on November 23-24, 2018 (November 23 was the centenary of the first German ships arriving in the Flow).  A number of distinguished speakers attended and presented papers on many aspects of the Flow from its history to its ecology.

It is hoped that papers and presentations from this conference will shortly be available through David Mackie at the Orkney Archives and Library, Kirkwall. 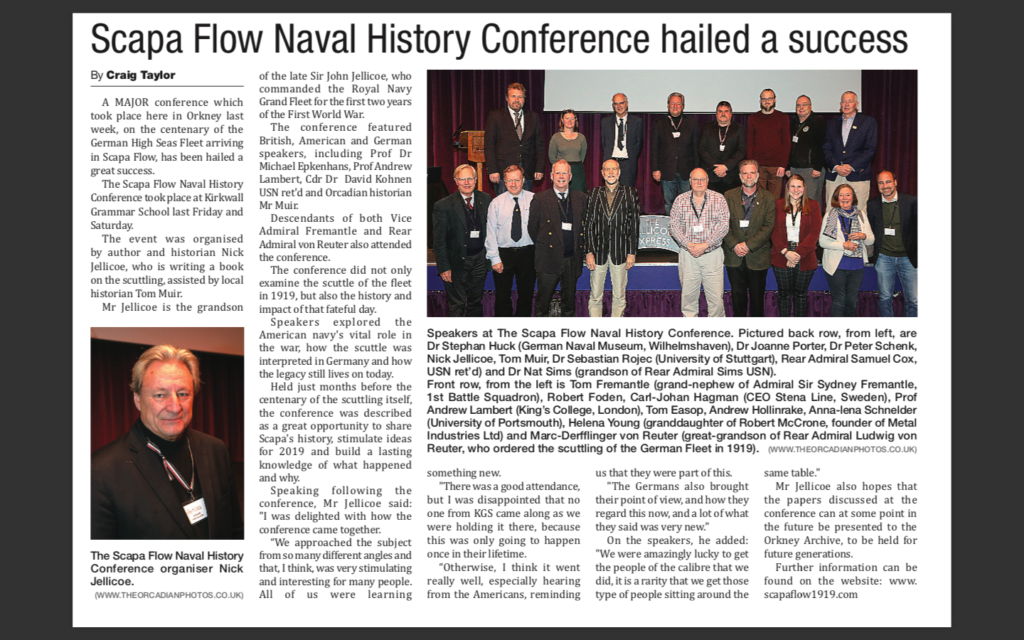 Exhibition opening Scapa Flow: Up Close and Underwater at 18:00. This is an exhibition of oil painting and photographs created underwater by artist Caroline Appleyard and photographer Marjo Tynkkynen.

Special screening of With All Flags Flying (1986 documentary) with an introduction from Emily Turton. Doors open 19.15 for 19.45 start,

Presentation of a theatre piece with music Beneath the Flow by the St. Magnus Players. Tickets £10 incl. transport from 1st May, JB Rosey, Stromness and Ortak, Albert Street, Kirkwall. Bus pick-up 18.00 from Stromness Ferry Terminal. The gates at Ness Battery will open 45 minutes before the show. Wheelchair access to be pre-booked when purchasing ticket. Running time – approximately one hour.

An underwater tour of the German High Seas Fleet by the Scapa 100 team The German Fleet Today.

Book signing with author Nick Jellicoe who will be presenting two new books on the scuttling of the German Fleet in Scapa Flow. 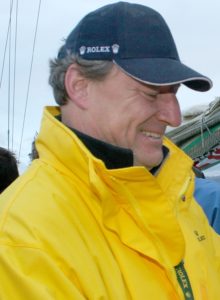 The Last Days of the High Seas Fleet gives the political and military context of the scuttle, how it was planned and executed and the impact that the scuttling had on future fleet composition of the major powers (341 pages & illustrations £25.00) 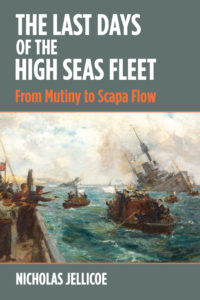 From Scuttle to Salvage, the second book, is the story told in 200 photographs, sourced in Orkney, Denmark and Germany. The accompanying text is in English and German. It is published locally by the Orcadian Press (128 pages £19.99).

Meet the Scuttle descendants and hear a short presentation about the scuttle starting with the context of the German Naval mutiny in Wilhelmshaven and the discussion of what to do with the German fleet at Versailles. The presentation will be followed by a general discussion. Free admission.

18:00 Stromness Town Hall (By invitation only. Tickets will be available from 1st June at the OIC Customer Services in Kirkwall and Stromness.)

June 21 to June 23 2019, Orkney, Scapa Flow, Centenary of the Scuttling of the German High Seas Fleet

12:00 Cingalee Restoration Display. An exhibition of a 114-year-old Navy and Army Canteen Vessel that supplied the British Fleet through WW1 and WW2. Warehouse Buildings, Stromness from 21st to 23rd June.

Details Have still not been announced by the Orkney Island Council (OIC) but the events planned include the ringing of the salvaged bell from SMS von der Tann which has been brought over from the German Naval memorial at Laboe, Germany. 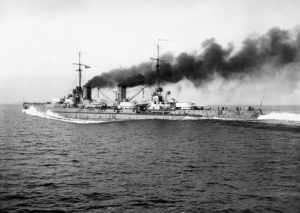 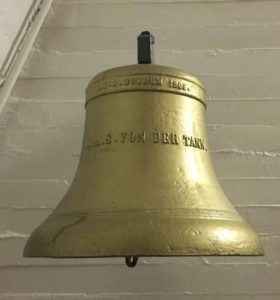 There will be a re-dedication ceremony at the Lyness Commonwealth Graves Commission cemetery focussing on the headstone of Kuno Eversberg, the young engineer from SMS Frankfurt, shot two days after the scuttle while a prisoner on a British battleship.

Descendants from the Flying Kestrel school outing as well as the Fremantle, Reuter and Madden families (shown below) will be present. 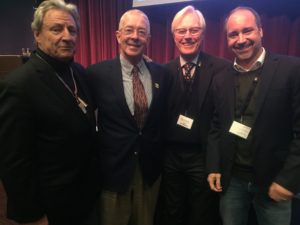 There will be a Festival Service to mark the role of Orkney in the Great War.

A conference is planned for October 2019. Details will be posted when known.